IS YOUR KNIFE AFGANISTAN TOUGH?

I first came across Andrew Jordan several years ago online when I was talking on a email thread about some project guns I was working on at the time... Andrews an ex-pat now living and working in the Netherlands he is an avid rifle / bow hunter and outdoors man and luckily for me since then we have regularly kept in touch.

I recently told Andrew that I was working in Afghanistan he immediately told me I needed a knife that would stand up to the riggers of what I was about to face. 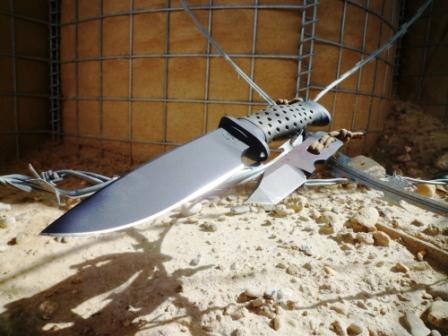 And to be honest id never thought about having a custom crafted knife, due to the cost id always gone down the route of of the shelf like most people I guess, but it took me only a few second to figure out that my long rifle proficiency had jumped up a higher level when I started to use guns that were purposely made for me, and at the other end of the scale my boots fit better due the custom moulded inserts, so why not go the same route with knife built for me and my job? This decision was made all the easier due to the fact I had already gone through two knives in my first year in .

So with the thought that it would be foolish not to invest in a quality tool that might well save my life I took a look at Andrews web site to see what was on offer, it was only then that you see broad range of skills that has made him a master craftsman in his field, and when you can list the likes of Ray Mears, Danish Special Forces, Royal Marine Commandos ect to name but a few amounst your past clients then you know your in good company and not going to be disappointed with the end result.

Steel working obviously runs in his family with him learning at his grandfarthers side from the age of five before taking up the calling himself. After years of studying in the art of steel he started creating on his own designs in edged weapons including the construction of medieval arms and armour.

Ultimately he was accepted as (deshi) apprentice to Kunihire Kawachi in , where he spent the next two years before settling in the . Andrew has been hand forging blades for over 25 years in the time since he has won more tittles at blade exhibitions than I care to name hear. 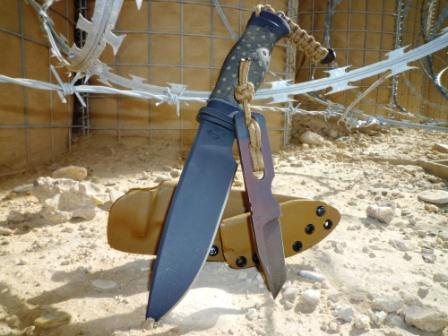 As the most important part of any blade is the steel he mostly uses tamahagane (bloom) steel, 15N20 / 1:2842 for his pattern- 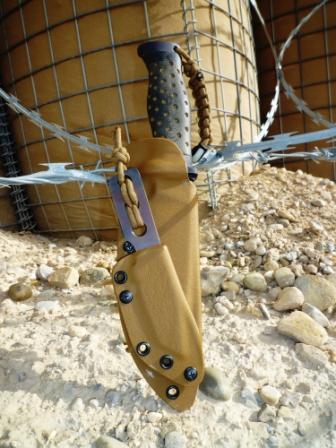 welded blades or Ludemann steels for his simpler knives. He makes a full range of knives from folders, utility knives, hunting knives, military blades, collector's blades and Dark Ages Saexes and swords as well as European medieval swords not to mention some of the most beautiful patterns I have ever seen.

All of Andrew's blades are hand-forged, tempered and finished to the customer's requirements. "I strive for the union of art and craft. It is not enough for a blade to be beautiful - above all it must be functional". As well as creating blades with multiple zones of hardness (hamon) and full tangs, he works on the compression of the steel through the blade and the tang. All of his creations, from the basic pocket knife to the most beautiful Renaissance dagger, are working blades. I was challenged to try and break my knife but ive no need to try this as he does active quality control throughout his manufacturing testing to destruction for not only steel but design flaws. (pic 1 destruction tests)  While hand-made blades are more expensive and slower to make, his view is that you cannot guarantee the structural quality of the steel or the subtle physical characteristics of the blade if you start from a pressed steel blank

Being ex forces himself Andrew had a good idea of the knife he wanted to make, something in the medium size range after all to big means to heavy and unwieldy so forget what you see in Rambo films, but it must have a good thick spine for strength (as it will get used as a pry bar) it must hold a good edge without being 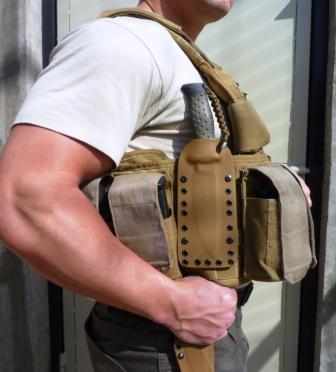 brittle this means the steel must be the best quality, solid one piece construction with no whistles or gadgets to shake loose or fall of and a good non slip grip.

At 10 inches total length and a blade length of 6 inches the knife is well balanced just behind the front guard, the slight serrations on the spine and the gap behind blade edge allow the knife to be use with the forefinger and thumb forward of the guard for greater control. 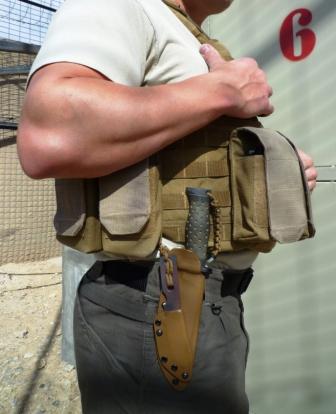 The grip is micarta with slight dimples cut into it this will be of benefit in maintaining a solid grip even with the dust and sweat. The pommel has a lanyard hole in it which I will be using with a bungee cord attachment attached to my webbing.

One other thing I love about this shape, it has a graceful sweeping arc from pommel to point, this is not just aesthetic it has a purpose, is take a look at the point its directly in line with the centre of the hilt / pommel that means when you strike point first all of the force is delivered to the point, just where you want it, with knives that have the point higher or lower than the centre line of the blade tends to throw your hand either up or down therefore loosing some of the force you have directed at the object.

The overall finish is a matt black plasma coating I asked for this in case it was necessary to paint it the ubiquities sand / beige colour but when its sheathed the mottled maicarta blends in well enough for me and anyway it would be a crime to throw paint at it.

The kidex sheath is moulded by Andrew to each individual knife so again theres no slop or rattle this means theres a reassuring grip around the front guard to keep the knife in place. The belt attachment is a clever clip by Blade-Tech that fits over itself and clips onto the base, this saves threading the usual arrangement onto your belt.

Knowing I would be in body armour Andrew made a second sheath to fit the Mollie webbing, this mollie, is a sewn on netting which is now standard throughout the world for attaching bits of kit to your body armour or Burgan, so now I just move the knife from one sheath to the other depending if im in body armour or not, this also lets me carry the knife up side down if required

Andrew had one other trick up his sleeve, he made the small piggy back blade its a stripped down plain chisel blade that fits in its own sheath on top of the larger knife. Its only 4 3/4 inches long and is infinitely useful when a big blade is just to big for those fiddly little jobs.. But for me it does have an added advantage of being easily concealable in the hand yet enough blade length to cause damage if required to do so.

With a spine thickness of 6mm im sure its pretty much indestructible.

Ok so about now youre probably saying to yourself thats all well and good for a military situation but what use is such a knife to me? Well I can tell you from years of experience outdoors and hunting large game that this knife would fit equally well into any camping /adventure scenario you would care to put it into, and you could do no better for dressing game as a larger butchering knife.

Out here there is plenty of time to compare kit and with a multitude of nationalities its always interesting to see what people bring out to theatre an perhaps more importantly what works and what doesnt.. And at such times I get no bigger kick showing it off to others and saying 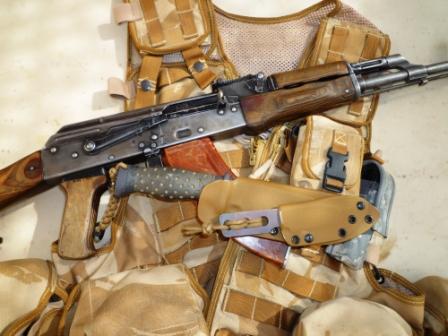 This was made for me

See Andrews products and pricing on his web site http://www.jordanknives.com/